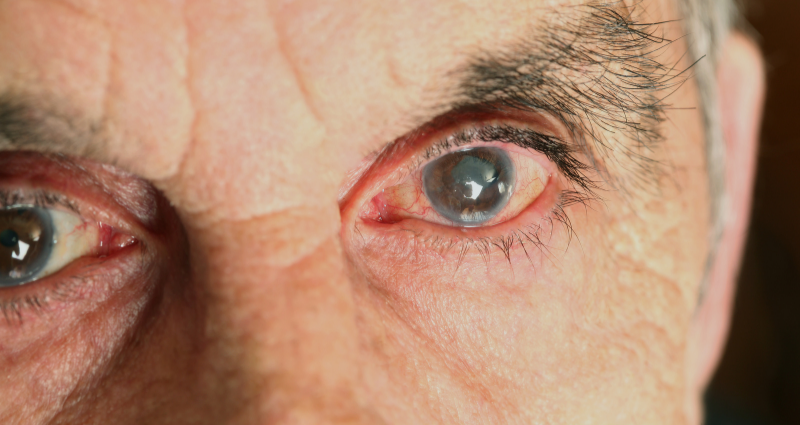 The human eye contains a lens which acts as an important optical surface and allows us to see clearly up close due to its ability to focus by the flexing and relaxing of the ciliary muscles attached to the lens.  In most cases the lens starts clear at birth but over time it often becomes hazy or cloudy as we age – this is referred to as a cataract.  There are many variations of cataracts from congenital cataracts that exist from birth to nuclear cataracts which effect the centre of the lens and cortical cataracts that effect the peripheral parts of the lens.  In the majority of patients, cataracts occur over age 65 but they can occur at all ages.

Cataracts are most commonly related to older age and the majority of patients don’t require cataract surgery until they are over 65.  However, there are several reasons for developing cataracts at a younger age including exposure to UV light, side effects of some medications such as steroids, cigarette smoke, and diabetes.  People with type II diabetes and people from countries close to the equator where there is more UV light often get diagnosed with visually significant cataracts at a younger age and may require surgery in their 40s or 50s.

How to Prevent Them

While there is no way to completely prevent the formation of cataracts, its very important to protect the eyes from UV light exposure by consistently wearing high quality sunglasses or UV protection eyeglasses.  Its also beneficial to have a diet rich in antioxidants such as vitamins A,C, and E, magnesium, and zinc.  Overall health, diet and exercise and avoiding smoking and diabetes if possible also play a role in cataract prevention.

What are the Symptoms?

One of the telltale signs of cataracts is worsening vision due to blurriness and haze that doesn’t get better or doesn’t improve significantly with an updated eyeglass prescription.  Many patients with cataracts complain of a haze in their vision which worsens at night and often complain of glare due to headlights when driving.  Cataracts are generally painless and are best diagnosed during your eye exam as the particular type you have can be assessed by your eye doctor.

In milder cases of nuclear cataracts there is often a myopic shift where your eyeglass prescription becomes more minus.  The opposite is true for cortical cataracts which may cause a hyperopic shift where your prescription becomes more plus.  In some cases, cataracts can also induce astigmatism due to changes in lenticular structure. Once your best correctable vision is not sufficient cataract surgery will ultimately be required in either situation.

How are They Treated?

When you have mild or early cataracts, adjusting your eyeglass prescription may be sufficient and give you adequate vision correction which is in some cases still 20/20.  If your cataracts progress and best correctable visual acuity falls below 20/60, cataract surgery is generally the best option.  However, in some cases patients may still complain of night time glare and halos or other visual deficiencies even though measured visual acuity is still good, in this case surgery is still often recommended.  Its important to keep in mind that while cataracts are extremely common in seniors, they may never progress to the point where cataract surgery is required.

Where Will My Cataract Surgery Be Performed?

At Optiview Eye Clinic we work with cataract surgeons from across the lower mainland. The majority of cataract surgeries for our patients are performed at Surrey Memorial or Delta Hospital.

Dr. Shiv Sharma is an Optometrist who specializes in family eye care, dry eye, and pediatric eye care. He obtained his Bachelor's degree in M.B.B. From Simon Fraser University in 2009 and his Doctorate of Optometry degree from the Southern College of Optometry in 2013. He is a strong advocate for innovation in optometry practice and consults for several ophthalmic industry companies.

What Are The Best Eye Drops For Dry Eyes?

Item added to your cart